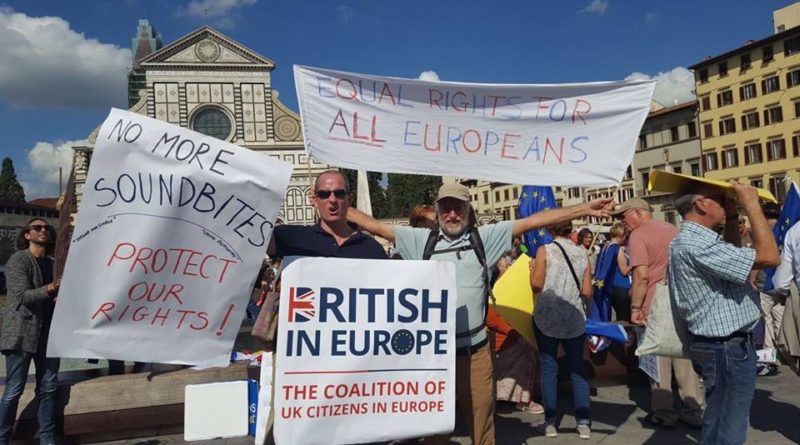 Jane Golding is a British lawyer who lives in Berlin. Born in the UK, she studied in France, qualified as a lawyer in Britain, lived in Belgium where she met her German husband, worked in Italy where her son was born, returned to Brussels where she had her second child and then moved to Germany with the entire family. The perfect example of a European life. Then Brexit came and everything was put in question. Will she be able to continue working between Berlin and Brussels? Will she need a visa every time she travels in Europe? Will she have to queue in a different line than her family at the airport? To be safe, Jane became a German citizen (while keeping a British passport). And she is also fighting to preserve EU rights as chair of British in Europe, a coalition of national groups representing UK citizens in EU countries.

How did you get involved with British in Europe?

Before the EU referendum, we had a group in Germany focusing on voting. Many of us who have lived outside the UK for more than 15 years have lost the right to vote, so we wanted to encourage others who could to register, and ensure they were informed about the consequences of the referendum. Everyone was hoping this wouldn’t be the outcome. When the result became clear, there was a sense of bereavement. The question was: how do I relate to my country now? So we got active and regrouped to safeguard our rights. We already had groups in Munich and Hamburg and the idea was to set up Germany-wide. Meanwhile other groups were being created in other EU countries. We needed to build a coalition but we didn’t really come together until we had the opportunity to be involved with the UK’s parliamentary committees. We were invited to participate in an oral evidence session, so we started to have conference calls to get organised. That was the catalyst, and also the occasion to meet representatives of the3million (a group representing EU citizens in the UK) and start working jointly with them.

How many people are part of British in Europe now?

We have around 30-35,000 people across all groups in Europe. Some are active in social media, others meet physically. There’s a growing number of satellite groups in smaller countries, for example in Estonia, Sweden, Austria. We are a grassroots volunteer movement and plan to set up as a non-profit organisation.

Was there anything similar before the EU referendum?

No, this is unprecedented. But Brexit is opening up a wider discussion on what EU citizenship means in practice. Many of us were young children when the UK joined the European Union. I am a “EU native”, I know nothing else than being part of the EU. Other members, who are older, also fear leaving as they know how it used to be before. Everything we had taken for granted has been taken out from under us, so this has made us think about our rights and what we are losing and join forces to defend what we have. This is a common theme for us and EU citizens in the UK.

Does it mean European citizenship is being rediscovered?

The debate around the EU referendum has very much focused on trade while our core principle is that individuals should not be affected retrospectively. But what we see now is how interlinked and indivisible EU rights are. We have become the symbol of EU citizenship: we are the example of how citizens have taken these rights and have done far more with them than politicians would have imagined. What we have is more than an immigration status, although the EU is still trying to define the full meaning of EU citizenship and Brexit is a serious test to it.

What do you think of the proposal of an associate EU citizenship for British nationals?

We have seen proposals to grant British people EU associate citizenship in the future, or to have citizenship not linked to nationality. It’s an interesting proposal but as a lawyer I think it won’t happen quickly. There will have to be a treaty change, it’s not something simple.

What is the most difficult part of this Brexit process?

It’s the feeling, and the reason why we set up these groups, that we didn’t have a voice. Many of us, both British in Europe and EU citizens in the UK, could not vote in the EU referendum. If you can’t vote, you are not involved in the democratic process and you cannot influence politicians in the same way. Also, we are people inputting our professional knowledge into the campaign but we are not detached, because we are living the consequences of this decision in our lives.

Do you think people and politicians understand this?

They do more and more. We have raised the profile of our campaign, but you have to explain what is happening to people and to politicians in the UK, and to local politicians here too, and illustrate with real stories that there are repercussions of political decisions on people’s lives.

What has been the biggest success so far?

Certainly the high level engagement with the Brexit task force in Brussels, the EU Council and many members of the European parliament. Now we also have good contacts with the UK Department for Exiting the EU, the Home Office and the Foreign Office. The difficulty is that it is a negotiation, there are compromises to be made and the devil is in the details.

Are you confident there will be a good agreement?

We hope so and we are working on it. We have to wait and see what comes out of the negotiations this week and remain positive. At least now we have a voice.

What is the biggest change you have seen or experienced in the past 15 months?

Before the referendum German politicians and businesses did not want the UK to leave the EU. Now the decision has been made and what Germany and other countries want is a clean and orderly Brexit, and for that to happen as rapidly as possible. Their focus is the integrity of the EU. This is a big change as we British will no longer be EU citizens. On a personal level, it meant I had to reassess the relationship with my country. It is almost like a divorce. I wasn’t sure where I belonged anymore and I had to think a lot about the practical steps to take for my future and the future of my family. I reflected a lot on what it means be British and European.

So what does it mean to be European?

It’s a difficult question. I always felt European. Since I was very young I believed we are more than how the nation state defines us. I always wanted to live and work in different countries, have free movement, experience other cultures. In Europe we have a lot in common in terms of history and culture, and we are very different too and it’s that diversity that makes Europe so rich. Being European also means having an intergenerational responsibility. My father was in World War II, my father in law was in Dresden when it was bombed. To our families Europe meant peace in our time and never war again. My husband is from East Germany and the fall of the Berlin Wall was another huge moment in history. The EU was there to support these transitions so that they happened mostly peacefully and these principles of peace and solidarity I want to pass on to my children.

What is the future for British in Europe?

We only formed as a coalition in January and now we focus on EU rights in the negotiations. The general principles are easy, but the details are going to be difficult. Once we get the details, it will take 6-7 months to draw that up in an agreement and then this will have to be implemented. People on the ground, at national, regional and local level, will have to know how to apply the rules. We will be there to inform and support people during the process. At the same time, we also have a strong European identity within our group. So another part of the work will be how to continue engaging as former EU citizens, what to bring to the UK and to the future of Europe. I believe this is how our role will develop over time.

Updated: Where to find free legal advice on residence and citizenship

18th February 2018 Claudia Comments Off on Updated: Where to find free legal advice on residence and citizenship 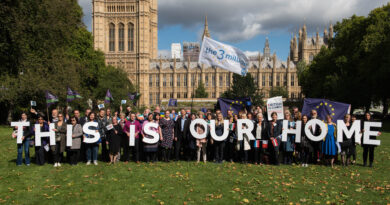 31st January 2019 Claudia Comments Off on How the public pilot of the settled status scheme works: a test by lawyers