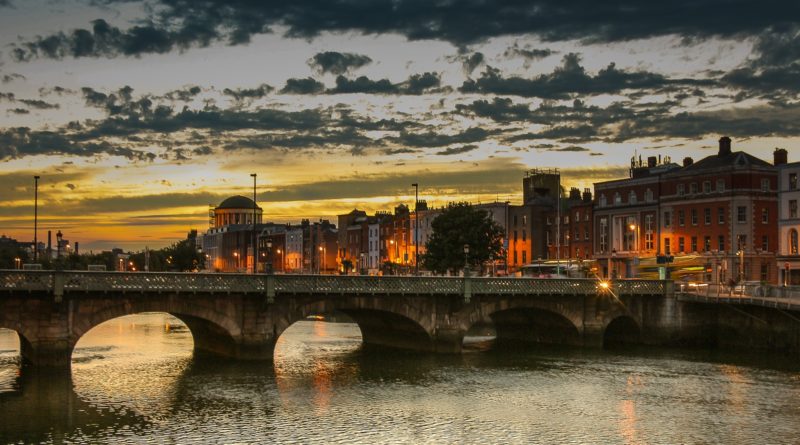 Not surprisingly, for 78% of EU citizens the Brexit agreement should protect the interests of the remaining EU members. Only 22% want to focus on building a new economic relationship with Britain or giving it special conditions after Brexit.

These opinions were expressed in a poll conducted by Red C Research for the European People’s Party (EPP), which aggregates centre-right political groups in Europe. Some 1,000 people were surveyed about Brexit in each of the 9 states selected for the poll (France, Germany, Ireland, Italy, Netherlands, Poland, Romania, Spain and Sweden).

Spain was the country with the highest percentage of respondents wanting to protect the EU27 (89%), France the most generous on building a new partnership with the UK (31%)

People’s priorities for the negotiations are first of all economic. 92% focus on the protection of the economies of the EU27, 91% want financial stability, 89% prefer long-term interests over short-term gains, and 88% say the UK should pay its outstanding financial obligations to the EU.

Secondly, people are concerned with citizens’ rights. 87% want to avoid having second-class EU citizens and 86% would like to see rights of EU nationals living in the UK protected. The countries most concerned about these aspects are Ireland (93%), Poland, Romania and Spain (92% each), and support is above 80% for all except for Sweden (78%).

Another study conducted in March by Kantar for the European parliament – the Eurobarometer – shows that the majority of Europeans are in favour of joint action by EU countries on Brexit (63%). Only 23% would prefer countries to act individually. The highest percentage of people supporting a joint approach is in Germany (82%), Lithuania (79%) and Malta (75%). 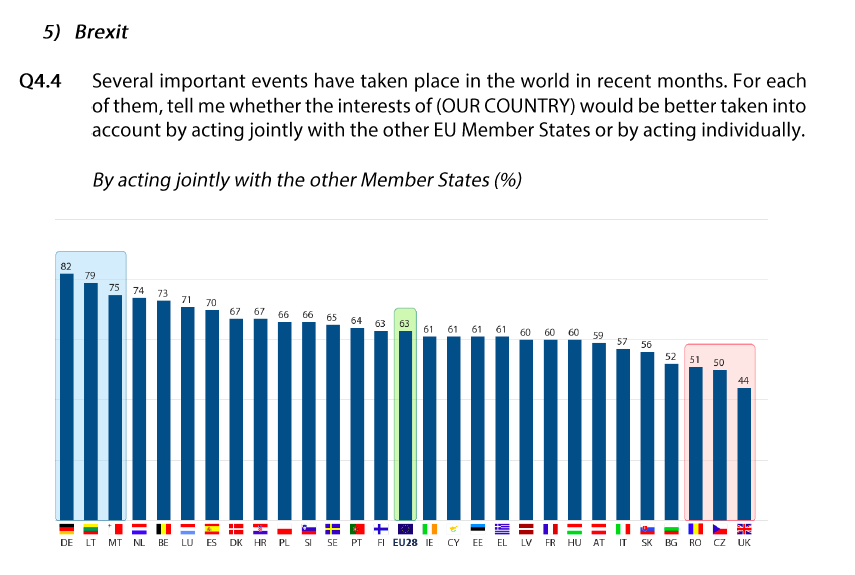 Views of the European Union

The Eurobarometer is a periodical survey carried out on people older than 15 across the 28 EU countries. Overall, 57% of those interviewed in March 2017 (almost 28,000 people) felt the European Union is a good thing. This percentage represents a 10% increase since the low point of 2011 (47%) and is almost at the level of ten years ago (58%). 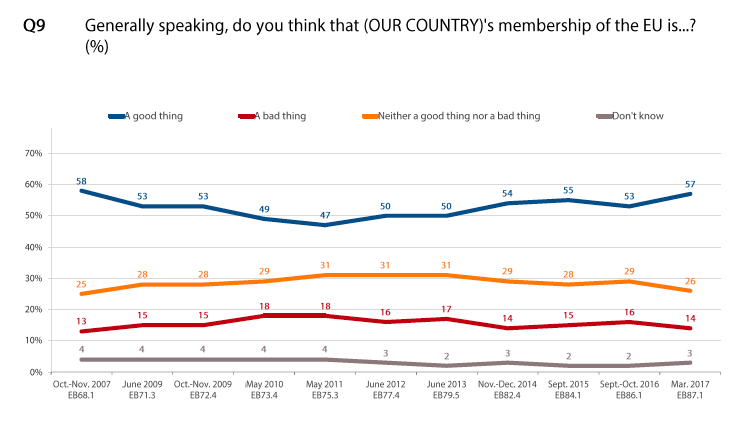 Luxembourg (84%), Ireland (81%), the Netherlands and Germany (79% each) are the countries with the greatest consensus on the benefits of the EU. The Czech Republic (33%), Greece (34%) and Italy (35%) are the ones with the lowest level of support, although they all saw increases since September 2016.

People are divided on the way democracy works in the European Union. A large proportion (47%) is not satisfied with it, while 43% are happy with the situation. People in Denmark, Luxembourg and the Netherlands are the most satisfied, while the most dissatisfied are in Slovenia, Hungary and Greece.

On average across Europe, 74% agree that what brings together citizens of EU countries is more important than what separates them (18%). The percentage is especially high in Ireland, Malta, the Netherlands and Sweden (above 87%). The lowest level of responses is in Estonia, Italy and France, but even in these countries the percentage is higher than 59%. In the UK, 76% of people agree with the statement too, more than the EU average. 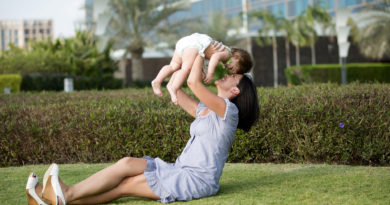 How to manage a bilingual home: understanding children’s response

21st April 2018 Claudia Delpero Comments Off on How to manage a bilingual home: understanding children’s response