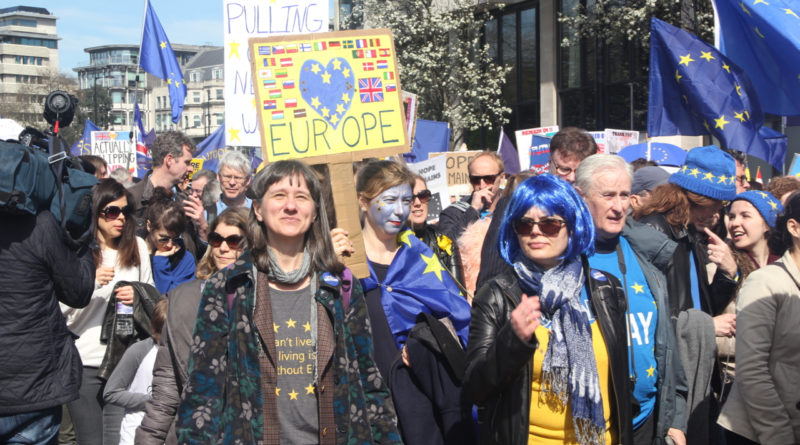 25 March 1957: six European countries – Belgium, the Netherlands, Luxembourg, Italy, France and West Germany – sign the Treaties of Rome creating the European Economic Community (EEC) and the European Atomic Energy Community (Euratom). The objective of the first is to establish a common area of exchanges based on the freedom of movement of people, goods and services. The aim of the second is to promote the pacific use of nuclear energy. The big idea is to bring peace and prosperity in the continent after the tragedy of the war. Although it was invited to the negotiating table, the UK decides not to take part: it can rely on the Commonwealth for trade and is opposed to surrendering sovereignty to the European institutions.

1961: the growth of EEC countries is spectacular, while the UK falters. So under Prime Minister Harold Macmillan the country applies to join the so-called Common Market. The request meets the veto of French President Charles De Gaulle. He considers the UK “incompatible” with the EEC due to its international liaisons, an economic system founded on industry rather than agriculture, and its “nature and structure.”

The USA are not happy at the rift and President John F. Kennedy commits to continue strengthening the economic integration of the bloc.

A second attempt to join is blocked again by the French President in 1967. The application is finally approved in 1969, after the fall of De Gaulle. The accession treaty is signed in 1972 and the UK joins in 1973, in the midst of the Cold War. Ireland and Denmark enter the EEC at the same time. 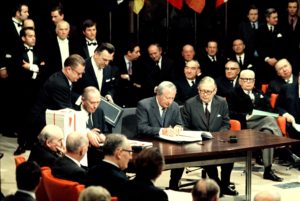 From the speech of Franco Maria Malfatti, then President of the European Commission: “These ten democratic countries, among the most developed in the world […] have as their common task not simply the improvement of the quality of life of their populations, they have also a real possibility to contribute to freedom, security, progress and peace on a world scale. To reach this goal, we must maintain those achievements which by so much effort we have already accomplished in the Six, and must go forward and complete the economic integration and political unification of our newly enlarged Community.”  (Audio in French.)

(In the photo, signing the Treaty: Sir Alex Douglas-Home, Secretary of State for Foreign and Commonwealth Affairs; Edward Heath, British Prime Minister; Geoffrey Rippon, Chancellor of the Duchy of Lancaster in charge of the Accession Negotiations. Photo: European Communities).

1975: Not everyone in the UK is happy with the European venture, so a referendum on the EEC membership is held. The “remain” prevails with 67% of the votes and a majority in almost all counties.

1977: Roy Jenkins, a British Labour, is appointed President of the European Commission. His College oversees the development of the Economic and Monetary Union. This includes the establishment, in 1979, of the European Monetary System (EMS), an agreement to link currencies and limit fluctuations. The EMS is the precursor of the euro, the common currency that the UK never joins. 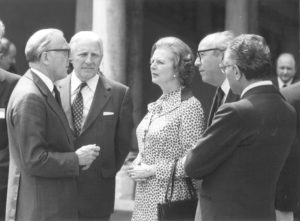 1987: Charles Henry Plumb, a former leader of the National Farmers Union, is elected President of the European Parliament, the only British holder of the post.

In 1987 the European integration also starts to accelerate, with the entry into force of the Single European Act. This is the first revision of the Treaty of Rome and introduces the Single Market. The subsequent progression is pushed by the fall of the Berlin Wall and the dismantling of the Soviet Union. The Single European Act is followed by the Treaty of Maastricht in 1992, which creates the EU, establishes the EU citizenship and lays the foundations for the Eurozone; the Treaty of Amsterdam in 1997, which gives more powers to the European Parliament; the Treaty of Nice in 2001 that reforms the EU institutions for the eastern expansion; and the Treaty of Lisbon in 2007, completing the reforms after the proposed “European Constitution” was voted down by referendums in France and the Netherlands. The UK remains ambivalent.

Source: Giphy.
2016: Prime Minister David Cameron obtains some concessions from other EU countries on limiting social welfare to EU citizens in the UK and exempting the country from the commitment to an ‘ever closer union’. Nevertheless, on June 23rd the UK decides by referendum to leave the European Union. This time the “leave” prevails with 52% of the votes.

2017: 60th anniversary of the Treaties of Rome. On March 25th EU leaders, except for the UK’s, celebrate the anniversary in Italy and approve the Rome Declaration. This sets out the future direction of the European Union. The Declaration says:

In the ten years to come we want a Union that is safe and secure, prosperous, competitive, sustainable and socially responsible, and with the will and capacity of playing a key role in the world and of shaping globalisation. We want a Union where citizens have new opportunities for cultural and social development and economic growth. We want a Union which remains open to those European countries that respect our values and are committed to promoting them.
We will act together, at different paces and intensity where necessary, while moving in the same direction, as we have done in the past, in line with the Treaties and keeping the door open to those who want to join later. Our Union is undivided and indivisible.

In preparation for the Rome summit, this is how Esteban González Pons, a Spanish political leader at the European Parliament, describes the current situation:

“Europe today limits populism in the north and refugees drowned in the sea to the south. To the east, the tanks of Putin; to the west the wall of Trump. In the past war, in the future Brexit.
Europe is today more alone than ever, but the citizens do not know it. Europe, however, is the best solution and we do not know how to explain it to citizens.
Globalization teaches us that Europe today is inevitable, it is the only alternative. But Brexit also teaches us that Europe is reversible, that we can walk backwards in history. But outside of Europe it is very cold. Brexit is the most selfish decision ever made since Winston Churchill saved Europe with the blood, sweat and tears of the English. Saying ‘Brexit’ is the most unsupportive way of saying goodbye. Europe is not a market, it is the will to live together. Leaving Europe is not leaving a market, is leaving shared dreams. It is possible to have a common market but if we do not have common dreams, we have nothing.
Europe is the peace that came after the disaster of war. Europe is the pardon between French and Germans. Europe is the return to freedom of Greece, Spain and Portugal. Europe is the fall of the Berlin Wall. Europe is the end of communism. Europe is the welfare state, is democracy. Europe is fundamental rights. Can we live without all that? Can we give up all that? For a market, are we going to leave all that behind?
I hope that the next summit in Rome speaks less of what Europe owes us and speaks more of what we owe it after all it has given us. The European Union is the only spring that our continent has lived in all its history.
I am one of those, Mr. Tusk, that the day Prime Minister May announces Brexit begins, will start dreaming of the morning when the English will come home.”
(translated by Javier Jimenez Arbelo.)

The British Prime Minister will notify the European Union of the intention to leave, starting the formal exit process, on March 29th. On the 25th, coinciding with the anniversary of the Treaties of Rome, tens of thousands of people took on the streets of London in a pro-EU demonstration. 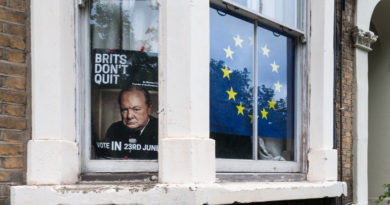 The UK’s identity crisis: interview with A. C. Grayling

One thought on “60 years of EU-UK relation: “it’s complicated””